Fairy Tail may have ended, but the mangaka Mashima Hiro has been spending the year celebrating his love of the characters by releasing special sketches for fans on Twitter. While he may have shared a more family-friendly piece for Christmas already, Mashima shared one more sketch for Lucy fans. 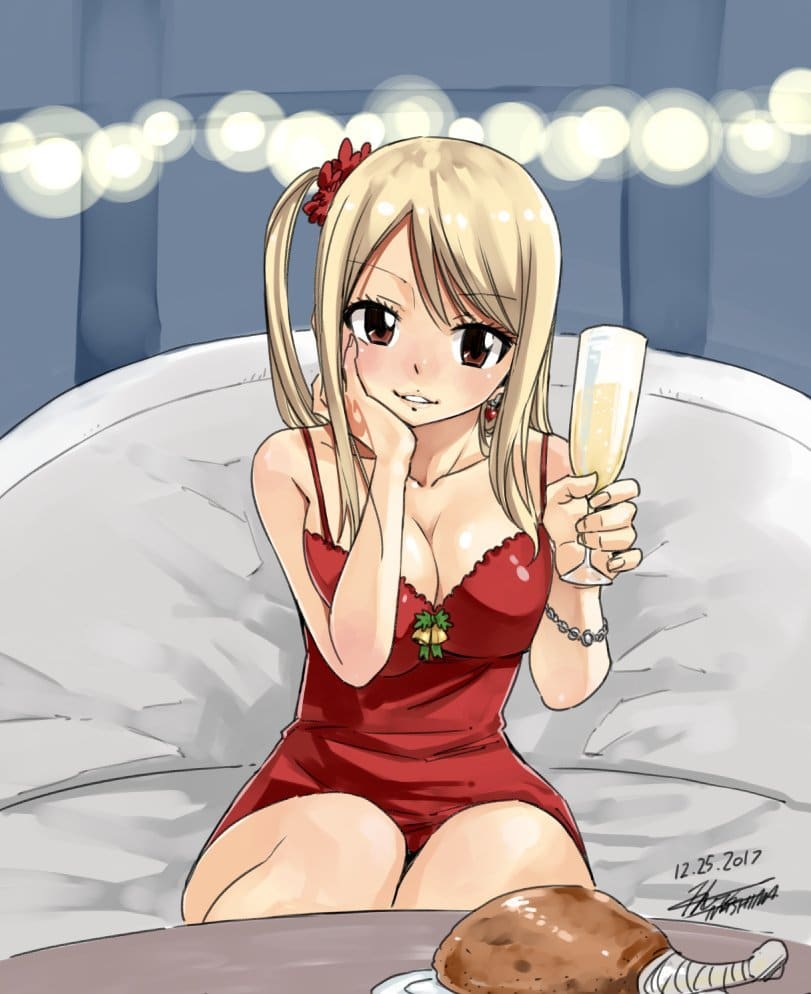 The sketch portrays Lucy in a tight fitting dress (as Mashima often does) celebrating Christmas with a bit of chicken and champagne. Fans of the character’s design will surely appreciate the way Mashima drew her here. The mangaka has also uploaded some rather sultry sketches of his characters to Twitter in the past. In fact, to celebrate the holidays even further, he recently uploaded a curvaceous sketch of Juvia in a revealing Santa suit and a less naughty sketch of Wendy and Plue. Last Halloween he has drawned both Erza and Lucy in cosplays. Lucy donned a tight-fitting cat costume while Erza wore a golden Playboy bunny suit.

The Halloween pair of sketches also led to a fan debate as fans felt Erza and Lucy got the brunt of the focus, which made some later sketches of Erza and Lucy with sexy clothing a bit harder to appreciate even when the sketches highlighted the kind of features fans of the series tended to enjoy.

But Mashima has also uploaded sketches for a different kind of fan as well. Fans of the “NaLu” ship in the series were treated to a sketch catering to their needs recently as it featured a handsomely dressed Natsu and a scantily clad Lucy.

For those unfamiliar with Fairy Tail, the series was originally created by Hiro Mashima. It is set in a fantasy world full of magic where Natsu Dragneel, a “Dragon Slayer” (Mage who can fight Dragons using their own magic) is in search of his missing foster father, the fire dragon Igneel. As he and his wizarding guild Fairy Tail get into adventures, Natsu always tries to find a way to succeed. The series ran in Weekly Shonen Magazine from August 2006 to July 2017 and has spawned 60 million copies. It was later adapted into an anime by A-1 Pictures, Dentsu Inc., and Satelight in 2009 and ended its first run in 2013. A second series ran from 2014 to 2016, and a third series is planned for a october 2018 release.